Cakewalk puts it on the line and takes a dive into the hardware market. I got to take a look at the USB audio interface and bundled software package.

Well, nothing beats a warm summer day except a warm summer day when a package arrives in the mail from Cakewalk. This particular day brought a package containing the Sonar PowerStudio 250. It is Cakewalk's first venture into the hardware market. Building on their partnership with Edirol I would assume brought this offering to market. The SPS-25, the model number for Cakewalk's USB audio interface device, has the same layout as Edirol's UA-25, but does have Cakewalk branding and different colors.

Coming along with the package is Cakewalk Sonar Studio Edition software package, not a light version or anything, the full Studio Edition of Sonar which is a great bundle.

Pictured below is the content of the Sonar PowerStudio 250 Package. 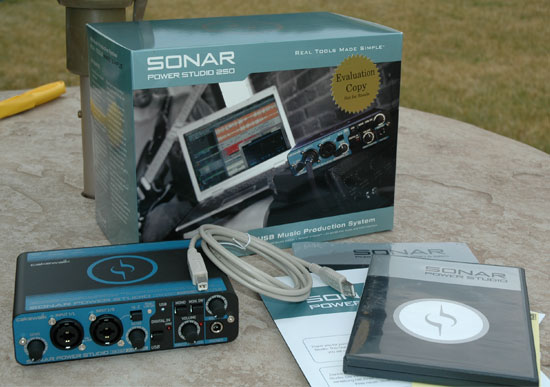 The Sonar PowerStudio 250 is a Windows XP only package, requiring a Pentium 4 1.3 GHz with 128 MB Ram but recommends a Pentium 4 2.8 GHz with 512 MB Ram. The minimum install needs 100 MB of disk space, however, if you want to install all the samples, loops and other bundled content a couple gigs is a good idea. At least a 1024x768 display is needed as well.

The Power Studio package comes in USB (PowerStudio 250) and FireWire (PowerStudio 660) packages. Today, I am looking at the USB package. 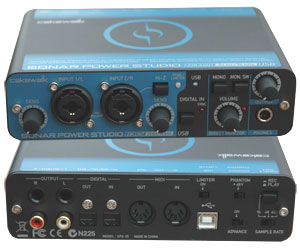 The hardware, model number SPS-25, as mentioned above, has a striking similarity to the Edirol UA-25. It's a 2 input/2 output 24-bit/96 kHz audio interface running with a +4 dBu output for professional use and is powered by the USB port.

The case seems to be constructed pretty well, the knobs are tight but smooth flowing, the buttons feel solid and the jacks are snug. All in all seems to be a very well built piece of hardware.

The available inputs are on the front and consist of the combination 1/4" and XLR jacks. Each combo jack has a sensitivity adjustments and a hi-z/lo-z switch. The XLR's do have a microphone preamp with +48v phantom power and a built in analog limiter on them. It also has a headphone output on the front as well. The back panel of the SPS-25 has 1/4" and RCA outputs, optical I/O, MIDI I/O as well as the on/off switches for integrated limiter, phantom power and other hardware options.

The unit installed painlessly, the default install brought with it a WDM driver latency of 3.0ms, pretty darn impressive, and switching to ASIO brought it to a 9.8ms latency. Both these were measured based on the default Sonar buffer settings. Not too bad at all for no tweaking...actually, quite good. Add to that zero latency monitoring that actually works and the performance is pretty good. 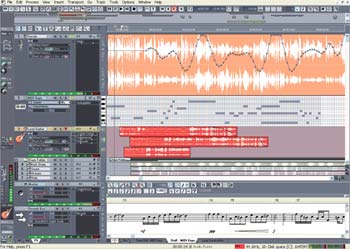 As the name probably indicates, Sonar PowerStudio 250 comes bundled with the Studio Edition of Cakewalk's flagship product, Sonar. Unlike with most hardware, which is generally bundled with feature limited or track number limited software, the Sonar PowerStudio 250 comes with the full Studio Edition which means unlimited audio and MIDI tracks. The only limit that exists is the limits of the power of your computer.

The Sonar series of software is a very professional quality, easy to use software environment. It works with its native format groove clip loops as well as Acid loops, it supports VST, DirectX and ReWire plugins and virtual instruments. Sonar comes with very powerful bussing options as well as has Cakewalk's excellent 64-bit double precision floating point engine.

If you have any control surfaces, Sonar has support for them and any MIDI synths and controllers. It also comes bundled with 28 audio effects, 8 MIDI effects and 5 virtual instruments. The version of Sonar bundled (Studio version 5) also features very powerful functions such as track freezing, layers and grouping with track folders.

A decent bundle of instruments and effects come along for the ride as well.

From Roland you get the V-Vocal vocal processor to fix little goof-ups on vocal tracks, GrooveSynth feature sound from the original Roland groove boxes and a TTS-1 GM2 Synth full of great samples for everybody.

How Does It All Work?

On the whole, this is a pretty simple unit to use. The interface is used within Sonar just like any other audio interface would be. The ins and outs are assigned just like any internal device. Two different inputs are available that can be used individually or as a single stereo input.

The limiter is a simple on/off switch as is the phantom power. The sample rate is set with a three position switch at 44.1, 48 or 96 kHz. If your MIDI controller is not one of the now common USB MIDI controllers it can just plug in to the MIDI DIN plugs in the back of the SPS-25, which also has on output available. 14", RCA and optical outputs are also available for audio output. All are easily configurable in the software output assignments.

My Personal Experience and Thoughts

With that you also have expansion room. The hardware has optical outputs which will allow the user to mix surround sound. The bundled software does not mix surround, but should you choose to upgrade to the Producer Edition of Sonar at some point (or any other software package), the hardware will support it, which is cool, so it's only a software upgrade, not a whole package. My only issue with the hardware is that I prefer external devices to be rack mountable rather than sitting on my desk top, I hates lots of boxes and such cluttering my desk. It should also be noted that Cakewalk offers incredible upgrade deals for existing customers when upgrading within their product line, so an upgrade to Producer Edition could be very reasonable as well.

The device supports WDM, ASIO and MME so it will work with most any mastering, sampling or tracking software. The sound quality is quite good. Only slight coloration of the preamps, which is expected unless you spend a LOAD of money on preamps. Having phantom power and preamps means that a small one-man-band type of situation would quite possibly not even need a mixing console, depending how that one man records and processes the tracks. The only real feature I see the hardware missing is a line level stereo input for monitoring, or play-along-with type stuff...that addition would be huge.

The package is easy to install and use, and I for one, was waiting to see something like this, as the growing partnership between Cakewalk, Roland and Edirol has been continually producing some stellar offerings, and adding hardware audio interfaces to the offerings is a great step.

Let's just hope they never go the route of other manufacturers and start making the software and hardware proprietary. Cakewalk has not, as of yet, buckled to the pressure of insane protection schemes such as dongles for protection from piracy, so I hope they keep standing firm and don't go the proprietary route either. That said, no signs indicate they will.

From my brief encounter with the Sonar PowerStudio 250, it appears to be a great all-in-one solution for somebody wanting to record at home. Bottom line, Sonar PowerStudio 250 is a decent price for a full featured audio and midi interface along with one of the most easy to use yet professional quality tracking application available.