Learn the basic interface of WaveLab 3, one of the best mastering tools on the market for the home recording artist or professional producer.

The intention of this series of articles is not to show you every little nook and cranny of Steinberg's WaveLab audio mastering application like some salesman would, but more to show the new user the features that will actually be used from the very beginning. As your interest grows, I find that most people learn the deep stuff themselves once we get kicked in the right direction. So consider this your kick.

WaveLab, at the time of this writing, is in it's third generation. That said, I want to issue some words of caution. If you have just installed WaveLab on your system and are having problems with it don't give up hope. WaveLab 3.0 was released about the same time some operating systems were being released or in development. Therefore, WaveLab 3.0 has various upgrades that have fixed problems created with Windows ME and Windows 2000. No worries about Mac, because WaveLab isn't available for a Mac, and never will be because many of the cool features in WaveLab can't be duplicated on a Mac. I believe 3.04d is the current version, and it runs very solid, I have used it on Windows 98SE, ME, NT4 and 2000 with no problems. So, rather than get into the details of what these issues are just go to http://www.steinberg.net and get the latest version updater available there. It will fix problems from funky display issues to full-blown system hardlock, plus a few cool new tools too...so just get the update and do yourself a favor.

Before anything we should discuss what file types WaveLab can work with. Wave lab can open many formats including .wav, .mp3, .mp2, .aiff, .au and a couple others. Oddly, though, WaveLab can only save audio as .wav, .mp3, .acm or .wma. Personally, I find this lack of support the biggest weakness WaveLab has. When competition like Sound Forge will export to many other formats including RealMedia and Windows .asf PLUS even build the redirect files for using them on the web, I find it hard to believe that Steinberg has fallen behind in this area. However, just because I do a lot of Web work, doesn't mean that everyone does, so it probably bothers me more than the typical WaveLab user. WaveLab also support live recording from a microphone or direct input.

As far as hardware support goes, WaveLab rocks, if your hardware can do it, WaveLab supports up to 192kHz sample rate and 32-bit float bit resolution and of course the very common 16, 20 and 24 bit cards. WaveLab also supports ASIO compliant sound cards which give a performance increase over typical DirectX-driven cards.

WaveLab also supports both DirectX and VST plugins via the very cool "Master Section" that we will get into later.

The toolbar is the key to running WaveLab, it is fully customizable to show only the buttons you want to see, I enabled all (or most) buttons for this screen capture to show you what they are.

Across the top we have the "New, Open and Save" buttons, then "Cut, Copy and Paste" followed by "Undo and Redo" and "Delete and Silence" buttons. The transport buttons on the top, right I am really hoping you all recognize. The bottom row of buttons are various manipulation tools and toolbar layout controls that will probably not be covered much at all in this series of articles.

In the preferences (-options-preferences in the menubar) you can set the size of the buttons, as well as many other aspects of the program including where to save temp files, what sound card input and output you wish to use and much more.

The Wave Window is where you do all your file editing. Pictured in this window is a sine wave view of your music where you can cut, copy, paste, reverse and otherwise mutilate your music. To highlight any part of the wave, just click on the point you wish to begin highlighting and hold the click, then drag to the point you wish to stop, let go of the mouse click and the area will highlight. To select the whole wave go to -edit-select-select all in the menubar.

The "density" of your wave view can be increased or decreased with the little sliders on the wave window with the magnifying glasses next to it. This is useful if you really have to edit down to a very fine area or need very close control for whatever reason.

There isn't a whole lot to say about it this window at the moment, but it is the key to your editing. 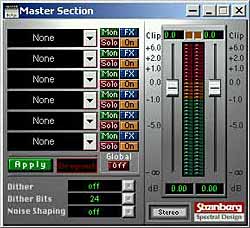 The Master Section is the Holy Grail of editing, this is you control panel for all of your effects, overall volume and how the sound is processed (with dithering or not, for example).

I am going to assume you all recognize the level meters, so I won't explain those :-). The section to the left of the box that has six boxes and a few buttons is your effect inserts and the on/off/mono/solo controls for each effect insert. Click on the little arrow next to a box and a menu will pop up that has all the supported effects on your system listed out and categorized by type (VST or DirectX) but most Steinberg effects list in the first menu. When you choose one of these, the controls for that effect will open.

Here's the cool deal...when these effects are open you can adjust the level while the music is playing, just like on the good ol' analog machines. Word of warning, though, if you are using a really CPU-intensive effect, like reverb or chorus, a smaller PC might stu-stu-stu-utter a little. Effects like reverb and chorus are doing billions of calculation to get the sound they need to produce so they need a big system, or run better on one anyway.

All this is done without altering the file at all. When you decide you like your sound, press the "apply" button to actually add the effects into the file and make it permanent.