A new guitar learning aid that is, well, a guitar that lights up at the frets...is it worth it?

I got the guitar today, arrival was somewhat lackluster, but I was still excited to check it out. It comes in a cardboard box, packed inside another cardboard box. It reminded me of the box my very first "Sears" acoustic guitar came in back when I was in like 3rd grade (ya know, back when dinosaurs roamed the earth, you young punks!). I opened up the box and the guitar is wrapped in some sort of foam padding type bag show at the left. It did, however come with the wrenches to do the intonation and truss rod adjustments, which is handy, not all guitars do. It also comes with a "Y" cable that is some sort of DIN type cable (an 8-pin configuration I have never seen before) that splits off to a 1/4" extension jack for the optional footswitch, and the other half to a USB cable to run in to your computer. Along with it are some brief, cheaply copied instruction regarding how to hook it up to your PC and amplifier.

It is important to note, so as not to leave a false image of the instrument or the company, that Fretlight does offer package deals for purchase including gig bags, amplifiers and such equipment, so, if you choose, you can get that equipment as well. Shipping guitars in a box isn't completely abnormal, lots of manufacturers do it I am told, I have only bought one over the internet and had a couple shipped to me, and they came heavily packaged, so I can't say from vast experience if that is true, it just struck me as odd. 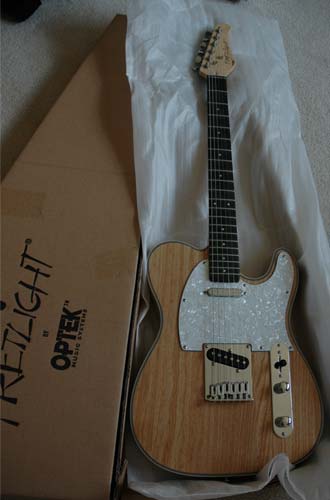 After opening the box and pulling it out of this bag my first thought was "even the cheapest of gig bags would be nicer than a box...where is my wife's camera now?". The resulting pictures after finding said camera are seen here.

I then proceeded to grab my 'lil smokie amp, a strap, a short patch cord and a beer. Outside goes me and my faithful dog, Sadie, to sit on the stoop and play a little bit, walk around the yard a play a bit more. Whoa...it's in tune...right out of the box, only the g string being a bit low, and I will try very hard to not make some silly guy "g-string" joke.

Now, I will say this as a prologue; I have never been a big fan of the Telecaster, however, I did find this guitar quite comfortable to play both standing and sitting, walking around and standing still. It was light weight and the action was very loose and playable. As typical, the tone knob is worthless, the volume worked as expected, both were smooth and quiet, and toggle switch was solid moving between the dual single coil pickups and you could hear the vivid difference switching between the bridge, neck and combined settings. I gained a bit of respect for the product, and actually, the Telecaster on the whole at this point. I have not plugged it in and lit anything up yet, but I did inspect the neck, it's quite nice. Smooth and I see no indication of the lights within, though, it is obviously note a real maple or rosewood neck.

Lets plug it in to the PC!

Looking at the instructions it says multiple times to use the three prong grounded power cables, and, if using a Laptop, to run off the battery. Interesting, makes me wanna un-ground it to see why, and because, well, that is just my nature, but, it's a loaner for review, so I digress. Also, be warned, do not use a USB hub, only a root USB connection.

The documentation also includes note to a guitar technician due to the wires within, and the fact ::ding, ding, I guessed it:: it has a polymer neck. It also makes mention of a DVD that comes with the guitar for instruction on getting started and whatnot...I received no such DVD.

So I download some software from the website. After installing the software, the USB port recognized the guitar right away, no additional driver installs or anything.

After contacting Fretlight and waiting a couple days the DVD came. It was a DVD/CD combo package, the CD is full of the applications I'll talk about next, and the DVD is instructions for using the Fretlight. The DVD was enjoyable to watch, it was well produced and covered all the applications that work with the Fretlight guitar. It was quite interesting and succeeded in getting me pretty excited to plug it in. 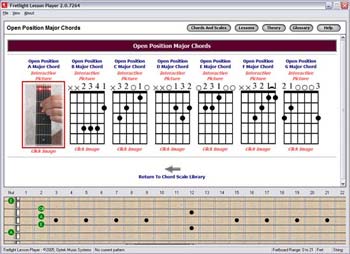 OK, so after a few days of just pickin' unplugged, I finally got around to plugging in to the PC and loading some software. First on the list is the lesson player.

The chord and scales section is just that. It opens as a huge list of the types of chords and scales you can view, you click into that section and it shows the tabs for those chords or scales, you click on one and it lights up on the neck of your guitar. Pretty damn cool.

I went flittin' around the different chord and scales. Kinda fun picking through them, quite a few options I never really worked with. Obviously a lot of work went in to this software package, not only are the chords and scales very thorough, it also includes lessons starting from how to hold a guitar to read tabs to different modes and scales to explaining what makes chord progressions work or not work.

The software works just like a web browser, so it's comfortable to get around in and is a familiar for most of us. If you do have any trouble with it, the help menu is always there, and the glossary can help with basic terminology that you may not understand.

The lesson player comes bundled with the first in a series of lessons. The first bundle consists of your first 30 lessons, additional lessons are available for purchase from Fretlight.

Be aware the Lesson Player is the only free application that comes with the guitar. The others mentioned below are a 2 week try before you buy version.

M-Player is what I see as probably the coolest application of the bunch for learning specific songs. Load up a song in MIDI format, or one of the demo songs they send along, pick the part you want to learn and it plays it, and lights up the note on the neck. It has tempo adjustments and has a looping markers to set up to practice just that part of the song. It's a pretty impressive little piece of software.

Improviser has pretty much the same style interface as M-Player looks-wise, other than a different color, but is a vastly different application. It's the same insofar as loading up a song, picking sections and scales, but, that is where the similarity ends. After picking all the options Fretlight lights up the scale you chose (after recommending one if you can't choose) and you just improvise over the song playing as a backing track. You can select positions of the scale, move from position to position every few measures to practice each position, or just light up the whole neck and wail away.

I would rather see these applications integrated as a single app but, none the less, they are cool, and have their own purposes, so I can see them being two separate apps as well.

Guitarz! will load up and play any properly formatted ASCII Tablature notation. It includes a huge chord library, will light up scales, chord progressions and more. This particular application didn't really impress me all that much. Kind of cool, but not as useful, as I see it, as the others.

This application can really help you learn the fretboard. Highlighting scales is the least of it. You can highlight specific notes up and down the whole fretboard, notes within a chord the whole length of the neck, even making the root notes blink to make it obvious where they are.

Set up a chord progression and Fretlight will light up the chords as they come up, you can improvise within that note structure and really get to know the scales and chords, always knowing what you are playing is within the chord itself, or scale.

My personal take on the Fretlight product is somewhat mixed. I was rather disappointed in the packaging, seemed risky and cheap, but not out of the ordinary for mailing guitars as I understand it. Then not having the DVD and having to get that separately was a mite frustrating. I did not view "full versions" of the software as I didn't purchase them so I only played with the demos. None the less, the software is clever and functional, with applications for many uses. The lesson play is free with the guitar, the others are a 2 week demo, and available for purchase after you decide which ones suit your specific needs.

All that being said, I was very pleasantly surprised to find the instrument was not a toy, it was a well built, very playable, decent sounding guitar that I played for hours out on my front step as the kids are playing. More guitar than I have played in a long time.

The lighting of it, which is the entire marketing of the product, is cool. Lights are nice and bright, and well placed on the neck, when not plugged in they are totally invisible, you can't see them on the neck at all. The only thing that was kind of strange is I always felt somewhat odd leaning over the guitar to see the lights. If I played it on my lap like Jeff Healey (which I did try) it is much easier to see and use Fretlight, but not as easy to play...unless you happen to be Jeff Healey. Leaning over to look at the neck isn't unusual in and of itself on any guitar when learning, the issue that made this a bit different was that I also had to look at the light underneath it, which requires a bit more of a straight on view to see what string it is under. However, with more use of the guitar, that may become less of an issue.

All in all, it's a good instrument with a clever twist on learning guitar. Even with the frustration of getting it all to me so I could try it, it was a positive experience. If it would have been a cheap, gimmicky guitar itself I would have been giving pretty low marks, but the fact it is a real, usable instrument rates it about a 7 out of 10 on my personal judgment scale. I think the guitar is cool, I like the idea, for some it may work better than for an old guy with decreasing flexibility to stay bent over to look at the neck rather than staring straight ahead at some tabs.