An already great drum sampler and sequencer in Battery 2 has been updated. Is it worth the upgrade?

A couple of years ago I took a look at Native Instruments Battery 2, NI's software drum machine and was blown away by it. It is, to this day, my first choice for drum sequencing when tracking. Needless to say, I jumped at the chance to take a look at Battery 3 when the opportunity was offered to me.

The application works with a multitude of plug-in formats including Audio Units, VSTÛ, RTASÛ, DXi or as a standalone application with ASIOÛ or Core Audio-compatible systems. The install requires a DVD drive, as is becoming common with apps like this due to the GB's of samples that are usually bundled along.

When I got the email about Battery 3 my first reaction was kind of a confused disposition, as, thus far in my use of Battery 2 I had never really had a "man, if it could only do this type of moment. I mean, every application has a couple wanna-haves but most of the time they are unrealistic wants. Battery 2 never had me wishing for a realistic want. When I got Battery 3 and installed it I found out some things I always wanted but never knew it. :-)

Rather than repeating a lot of info, you may want to browse my review of Battery 2 to catch up and then continue on with this versions highlights.

For system specs it requires the following: 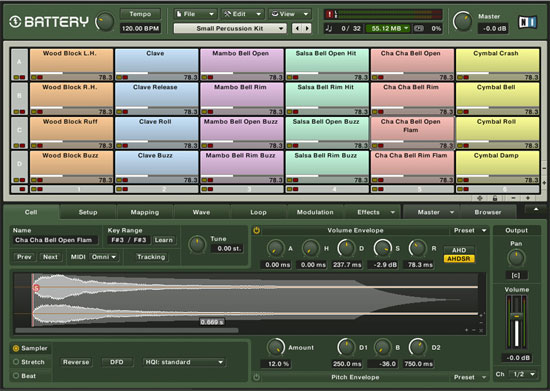 The interface is essentially the same as the previous version, which is very easy to use and very logical. I cool little grid at the top which contains all the samples for the kit that you have loaded, which has up to 128 cells available. Not sure about you, but no drummer I have ever played with needed 128 different pieces. The bottom of the application window changes depending on what you are doing. It is a hard drive browser, wave editor, effects processor, or any number of other functions.

One interesting thing I noticed was the addition of "articulations", which is a set of parameters to add individualism to each strike of the drum. Rolls, muting, flams, alternate and release strokes and more give the drums a more human sound than ever.

The using of effects is much easier than in version 2, with all effects in one single panel with each effect having it's own on/off control and effect controls.

The wave editor is a huge part of the upgrades in version 3. Adding fade ins and outs, cut, copy, paste, crop, lengthen or shorten a sample and much more. Individual sounds can be tweaked and reworked like never before.

Battery 3 comes with a bunch of high quality, powerful, and most of all useful, effects to apply to each sample in your kit. Compression and limiting effects are available for dynamic control in addition to reverb, EQ, filter and more. The effects in Battery 2 were good, these are just as good, if not better. The compressor had previously, and still does impress me personally, I wouldn't mind having it as a standalone compression plug to use in other applications.

All of the effects are accessible from a single view on the lower window of the application. Each effect has it's own on/off control to conserve processor power by turning off any effect that isn't being used. Each effect has knobs to control its parameters, and many parameters are also able to be controlled by dragging wave forms and frequency curves around in the wave window.

One of the cooler features added to Battery 3 is the wave editor. This is a single pane, highly functional, feature filled wave editor, bringing with it the ability to slice, dice, chop and fade the existing samples in any cell to suit the specific needs of the musical piece.

The wave editor contains all the standard cut, copy and paste functions of any editor as well as fades, DC removal, reversing, normalizing and the like. It can go into enough detail to actually edit down to individual sample level affording the user to fully customize the sample being used to their liking. A very powerful edition to Battery for sure.

Probably for some, the single biggest addition to Battery in this latest offering the the loop creation features. Not only does it support 4 loops formats, including Apple Loops and Acid, but it allows for the easy creation of your own loops. The loops are easy to sync up, and even able to be sync'd up to your echos and delays, as well as the LFO's.

With the current popularity of loops in audio production, I suspect this feature will appeal to a lot of users.

In it's current version, Battery is, in my opinion, not even just a drum machine any more, it can edit and loops beats, master each sample and more. It's a very powerful tool that lives up to the quality standards held by Native Instruments, their products are expensive, but they are also top of the heap every time in terms of quality, UI and stability. This time around their authentication method seems a bit leaner and friendlier as well, I was somewhat annoyed by previous version of the copy protection scheme, which I did make note of in previous reviews, but this one is quicker and seemed much less of an annoyance.

The one problem that follows around any large application like this that uses large sample sets is the memory footprint it hogs up on the host system. Without samples it starts up taking 150k+ memory which is a lot. But, as stated, that is to be expected with applications of this size.

The usability and functionality of the tool is awesome, it is surely a worthy investment if you are a big user of loops and samples for your percussion tracks.