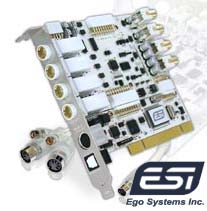 ESI has recently released a new PCI-based sound card called "[email protected]". [email protected]" is a 24-bit, 192kHz sampling card that has two analog ins and outs, all being balanced 1/4" TRS jacks or RCA jacks. Yes, you read that right. It has a very unique swappable I/0 socket that allows you to use either. Then, of course it also has S/PDIF and MIDI interfaces as well. Just for good measure they also tossed in an optical output. The S/PDIF and optical outs will also both handle 5.1 surround output.

[email protected] is designed to work on any Windows system beyond Windows 98SE. A Mac G5 version is on it's way as well. It has ASIO 2.0 compatible drivers, based on ESI's "E-WDM" driver technology.

Upon opening the box [email protected] seemed different. It is a white circuit board, packed in a white box with a modern looking transparent breakout cable for the S/PDIF and MIDI interfaces. When preparing to install the card, I pulled it out of the box, I was then presented with a rather unique decision...whether to use 1/4" balanced or RCA jacks for the analog ins. In my excitement to get playing, and the fact my system was already set up to use RCA jacks with my current card, I opted to leave it in it's default arrangement and left the RCA's in place. If I would have chosen to change, it's just a matter of a couple of screws and moving the RCA out of it's place and placing the 1/4" plate in it's place. To me, this is a very unique, and very handy feature that could allow this card to work for anyone. Kudos to ESI for that vision, I think it has yet to be noticed exactly how much that single feature could increase the user base of the product. 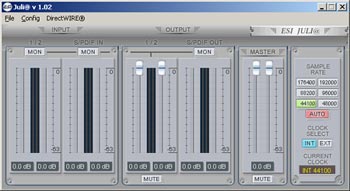 Installation of the card was pleasantly simple, I just uninstalled my current card drivers, shut down, removed the card, put in the [email protected] and fired up the PC. Windows then took care of everything via the driver wizard. I like this type of install. Too often these days manufacturers want you to cancel out of the wizard, go to their CD and go through a custom install wizard as if you were installing an application. And often device drivers like to think there are a full blown application with massive control panels and stuff that often live their whole life on your PC without ever being touched as much of what they do should, and often is handled by the application being used for recording.

The screen shot at the right is [email protected]'s control panel. Straight forward, simple, and exactly what you need. Input and output level for the analog and S/PDIF inputs and outputs. The optical output, like the S/PDIF output is constant, unchangeable level.

I did quickly find out that the drivers on the CD are not the latest, so I did go to the web site and download the newest drivers. The driver bundle comes with an uninstaller for previous versions, which I used. After uninstalling the driver, my speakers started making this static noise and the PC then froze up solid. Upon a hard reboot the install wizard worked as expected the new drivers went in and I resumed normal PC usage. I then received a beta driver for testing, in which the same uninstall/lockup arose, so, while it probably does not happen for everyone, the driver updating process was not trouble free, but not painful either. Though having to hard-reset a Windows PC is never a good thing to have to do. After those two experiences, the beta driver gave me a little trouble so I regressed back to the previous stable driver, which I did a typical Windows uninstall/update for and it was very smooth, did not freeze up and regressed perfectly.

I also noticed that when using the ASIO drivers, in many recording application they have a shortcut button to open the driver control panel from within the application, rather than clicking on the taskbar icon, a button to which I have become accustomed to use. With the [email protected] that buttons does not work. This is hardly a deal-killer either, just another minor habit to break, and I also hope that this issue will be resolved in a future driver update.

Should you require more advanced routing options, which many manufacturers work into their primary control panel that often leads to confusion for the novice users (we have seen many topics on those subjects at our forums) you can always launch their DirectWireŪ module.

DirectWireŪ is a software based "virtual wiring" system developed by AudioTrak, a division of ESI. It is used for some more advanced routing options using the standard driver types WDM, ASIO and MME. And these can even be used simultaneously. This DirectWireŪ system can also route signals output via GigaStudio.

Without getting in to a great deal of detail here, since it is beyond the scope of this review, I leave it at saying that DirectWireŪ can be looked at as a sort of software patchbay between drivers and devices on your PC. I better tutorial for this system can be found at the AudioTrak web site.

The "E-WDM" drivers supplied with this card is an ESI-developed standard that is what Microsoft's original WDM standard was supposed to do, that is, create a single driver type that supports all devices. This driver, which is now shipping with almost every ESI sound device, supports standard WDM driver specifications as well as ASIO 2.0, GIGAStudio, MME, ESI's DirectWireŪ technology, DirectSound and much more, all rolled in to a single device driver. The result is a very high performance, low latency driver that well out performs my previous card. Their implementation of the WDM driver spec is the best performing that I have seen in any of the dozen or so devices I have played with in my life.

[email protected] is a 24-bit, 192kHz card, and it has superb sound quality. I am an ASIO users myself, and upon installing [email protected] my latency dropped to an all-time low of 5.8ms at 16-bit, 44.1kHz with absolutely no tweaking of the application settings at all. I did however try the WDM drivers just for the purpose of the review and actually, the results to me put WDM a little bit higher on my list of acceptable driver types. Until now, I have not had the luck to have a card that had WDM drivers that would even come close to the latency and performance of ASIO, but these were nose-to-nose at 44.1 only at the higher sample rates did ASIO start nudging ahead.

Aside from the latency, the sound quality and resource usage was very good, even at very high bit rates and sample rates the [email protected] was very reliable. I am very impressed with the unit thus far.

All inputs and outputs are gold connectors, which is arguable any better or worse than standard connectors for sound, but it looks good and the card has very clean connections. The S/PDIF and optical outputs can put out very well separated, and very powerful 5.1 surround signal. Many cards int his price range have 5.1 S/PDIF signals, so that in itself isn't an unexpected feature, but the optical output is a very welcome addition and definitely raises the bar for other manufacturers in the market.

Well, as if this card isn't enough, [email protected] also comes bundled with a lite version of Ableton Live, which is a popular recording application.

Of course, being a bundled version, it does have limitations, which are as follows, as relayed to me from ESI:

That does look like a pretty long list of limitations, but as you may notice, the ability to save a song is not disabled, meaning, even without some of those more advanced features, the application is fully capable of recording and producing songs of up to 10 tracks, giving the user a taste of hard disk recording with their new sound card. Also, with the card comes a coupon which allows the user to buy the full application at a discounted price as well. So, if you dig it, and start outgrowing the limits of the application, there is an easy upgrade path and saves some money too, how cool is that?

For the suggested retail price of $180 USD, this seems, from my use at this point, to be a bargain. It does have a limited user base due to the 2 in two out analog format, as some users want 4 or more ins and outs to record more instruments simultaneously, however, for the one-man band situation, or a studio that does primarily post-production work this card has all the goodies. 24-bit resolution, 192kHz sampling put it high on the specs, their ASIO drivers are superb and WDM are better than any other WDM I have seen with a card in this market space. Add to that the bundled Ableton Live and the swapping analog I/O bay, which is one very ingenious, and very useful feature, makes the card able to work for most anybody, regardless of other gear.

The messy driver updating was annoying, but that is not a part of normal usage, just maintenance, and at this point the drivers are very stable and perform very well, so I wonder how much more updating the drivers will see.

I feel odd, and kind of like I'm cheating, by having really nothing but positive things to say, as it's not usually the case, but this card really impresses me from its sound quality and driver performance...so what can I say? I can say one thing for sure...ESI...you are NOT getting this demo back...where do I send the check?