Let's take a look at this freeware audio editor and see what makes it stand out among free editors, and how to set it up. 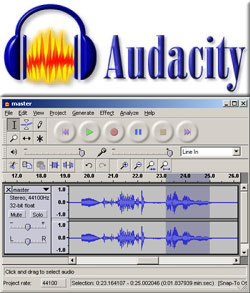 According to the web site at http://audacity.sourceforge.net/: "Audacity is a free audio editor. You can record sounds, play sounds, import and export WAV, AIFF, Ogg Vorbis, and MP3 files, and more. Use it to edit your sounds using Cut, Copy and Paste (with unlimited Undo), mix tracks together, or apply effects to your recordings. It also has a built-in amplitude envelope editor, a customizable spectrogram mode and a frequency analysis window for audio analysis applications. Built-in effects include Echo, Change Tempo, and Noise Removal, and it also supports VST and LADSPA plug-in effects."

That sums up Audacity pretty well as an overview. During a little project I had recently, which was creating a video for my latest application to the reality show "Survivor" I decided to use Audacity to edit and produce the audio sound track that played behind my video for the application.

All the necessary features are here. Once you have an audio file opened you have a very full set of editing features at your disposal including the usual such as cut, copy and pasting function with key shortcuts, the file zooming works well. There is a drawing tool, that, when zoomed in far enough to see each individual sample you can actually move the sample level which comes in very handy at removing momentary peaks and clips. You can view the file with waveform, spectrum and pitch views, which the average person will never use anything but waveform, but it is a neat feature none the less.

Audacity comes with a very complete line of effects that go well beyond the typical normalizing and equalizing. It contains a noise removal tool, that while far from the best in the business, it is surely capable of getting rid of some noise. Additional there are wah wah effects, reverb, phaser, changing pitch, tempo and speed and many, many others.

The simple tasks of cutting, copying, pasting, normalizing and creating fade ins and fade outs are very simple and effortless, the zoom allows you to get at the most intricate details of the audio for the most accurate and pin-pointed edits.

Audacity also has the ability to generate silence, white noise, tone and a click track. These features can come in handy for everything from intro beats, to padding tracks to even helping set up and tune a studio with the tone and white noise generators.

Installing the application itself is typical process for whatever operating system you are working on. This alone is hardly worthy of documenting in and of itself, however, to get full use from it, you'll need to do more.

In order to export to different file types (mp3, for example) you need to download the LAME encoder and unzip in to a directory in your file system. Personally, I usually create a directory named "lame" inside the Audacity program directory and extract it there. Then, the first time you try to export a file to mp3, you will be prompted to browse and find that encoding file. After that first time, Audacity will remember it.

Audacity also has the ability to export to many other file formats with the FFmpeg. It is installed the same way that the mp3 encoder is, and it will provide yourwith export support for AC3, AMR(NB), M4A and WMA, and give you the ability to import audio from video files...which comes in handy every now and then!

Audacity also supports LADSPA, Nyquist and good ol' VST plugins. LADSPA and Nyquist plugins are easy, just unzip them into the "Plug-Ins" directory that is sitting inside the Program directory, you likely saw it while creating the aforementioned "lame" directory if you installed LAME the way I explained. To see the plugin effects in the application, you will need to restart Audacity if it was open while you extracted the plugins.

For VST plugins, you also extract them into that same Plug-Ins directory, and, under "Effects Preferences" you can check the "Rescan VST effects next time Audacity is started" and restart the program.

With Linux it is a bit more involved, and is documented in Audacity's documentation, considering not many need that, I'll refer people to that documentation instead of repeat it all.

Audacity works much like most any other audio editor. Open a track, highlight the track or various parts to cut or process the selected area with the plugin effects...after processing, export to final file type. Easy as that. But there is more to Audacity.

There is a plethora of plugins that come bundled with Audacity, effects for compression, limiting, gain changing, noise removal, EQ, fade in, fade out, even a wah wah effect, which, well, I rarely see in a tool normally used for mastering.

That being said, Audacity CAN be used for multitrack handling as well Once a file is open, one can import multiple audio files and mix them...or, record them. I don't recommend use Audacity in this way, because it is a bit cludgy compared to the many other tools out there (Reaper and Kristal Audio Engine come to mind) but it can be done for people that only use audio, no MIDI.

There are many tools for redrawing wave forms, input and output level meters, zooming in and out and more.

All in all, this is a very complete toolbox, with some limitations such as file export options, and a bit more manual to configure in some cases, but it can do a lot of things that applications costing hundreds of dollars can do. If you are smart with your money, or, don't have much of it, Audacity can be a life saver.