After a few months of managing a semi-remote recording project over Google Drive, I have picked up on a few things that may be of help to others. 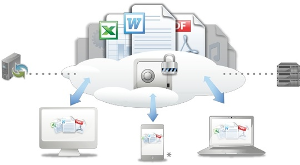 A while back a friend of mine and myself started working on some of his songs for fun. He'd write the song, guitar and sing vocals, I'd add bass guitar, program some drums, and we'd sprinkle in synths, odd stringed instruments or whatever else we find a need for. Though we only live about a mile apart, we are both busy fathers with active jobs and lives, so our ability to actually get together in the same room at the same time doesn't happen as often as we'd like.

So, considering we are probably not the only people with this problem, I figured I'd write a little bit about what we do and how we manage our remote work. While this article will apply in most detail to using Google Drive, it can apply equally well to Dropbox, Skydrive or any other cloud based file sharing system.

For those that have not used cloud base file sharing as yet, I guess a little primer would be helpful. This type of storage is very effective such tasks as this, without introducing the complexity of FTP servers and the like. Google Drive (or Dropbox, or Skydrive, or iDrive, or any other) gives you a certain allotment of space on their servers to use to store your files on. I believe Google Drive is 5GB by default. Then each person uses it downloads the syncing application to their computer and logs in to their account. Once that is done, whatever is put into the "Drive" (or Dropbox or whatever) directory on your computer will be automatically moved up to your cloud space.

To use this with a group of people, these services also have the ability to share your files with other users, and when another user accepts and invitation to share something of yours, it will automatically come down into their drive. All the file movement happens behind the scenes, requiring you to do nothing but make sure it's in the right directory and shared with the right people.

The application monitors the timestamps on your files, the servers files, and the files of anyone else sharing it, and when it sees a new version on anybody's workstation, it will begin transferring it up to the cloud, and then down to the other users workstations, keeping everything nice and sync'd up.

How Our Process Evolved

We had already had a decent recording platform defined, and already had some projects in progress. We use the Reaper Audio Workstation, and have a few selected plugins (Green Machine, some Line 6 stuff, a couple bass modeling plugs, etc) and a couple virtual instruments (BFD Eco, and a couple of freeware soft synths). We keep our workstations set up with the same instruments so we don't start swapping music with some effects being used that the other doesn't have. That is always an easy cause for frustration.

From there, we realized we both already have google accounts, so we already have Google Drive...so, we both download the sync application for our workstations and set up our our computers as would be most convenient for us.

Google gives quite a bit of space, so we weren't really worried about aggressive compression of the files or anything like that, so we started storing each project in it's own folder, right straight in Drive, keeping each folder with all project files and any support documents of lyrics, BPM charts, chord progressions and whatever else was needed. So it was a nice, neat way to store and work on everything.

A problem soon cropped up, though, it seemed Google Drive didn't not like the .rpp extension (Reaper's project file extension) for whatever reason, and stopped syncing them...it got to be a problem when we were in active work on any specific song.

Once that started happening, and realizing that every cloud based file storage system has issues with various file types, we figured it's time to start zipping them up, not for any space savings, but just to keep things syncing properly. So we got the most recent version of each project, zipped them up, deleted the Drive folders and sync'd up the zip files. Now we just grab the zips, unzip them into their Reaper workplace on our computers, do our parts, zip them back up into Drive and let Drive do it's thing.

Since we have figured out this system, progress has been quite smooth. We are now adding a third member into the mix, which could prove interesting, we'll see how that affects the process in time.