Looking at Cakewalk's new release for guitar players, including a USB audio interface!

Cakewalk has just released the fourth version of their software package dedicated to guitarists, singer and songwriters. Designed for ease of use and packaged with enough virtual instruments to build a complete band behind the user via MIDI tracks, and a software based amp simulator to create great, big tones without needing the high volumes often associated with such sounds.

Along with all those tools, there is also the great tracking and editing tools that Cakewalk has become known for in all their multitracking application, such as their flagship product, SONAR.

After your done recording, editing and mixing your project, burn it to CD, and/or upload to the web right within the application.

OK, great, those are all of Cakewalk's claims, let's put the program through the paces and see how it stacks up to the marketing.

Not surprisingly, Guitar Tracks Pro USB comes bundled along with a ::gasp:: USB Interface! This USB device, as illustrated below, is a decent package. It is built by Roland, cobranded for Cakewalk, feels solid and has a lot of routing options. It has, as expected, a switchable 1/4 inch guitar/mic input, a 1/8 inch digital input and output, headphones output with level control and stereo RCA inputs and outputs. It's powered via the USB port and also has a level input knob right on the top. It supports up to 24bit, 96kHz audio quality and can be operated via WDM or ASIO 2.0 drivers.

Multitracking is what originally got Cakewalk noticed long, long ago in a galaxy far, far away with their Pro Audio application, and even before. Their key area of expertise was the ease of use in what is often a very complex, multi-layered task. With the release of the first version of SONAR a new level of usability, and new level of sonic integrity came to all Cakewalk products.

Guitar Track Pro v4 continues that trend with what is basically the same interface that have been in all Cakewalk multitracking applications for the last few versions. Full support of audio and MIDI, full editing, plugins, bussing and much more.

It has not only the track view and the mixer view, for tracking and mixing duties, but there is also a notation view of sheet music. Notation or tablature can be quickly and easily generated from any MIDI track. There is also a view of a guitar neck showing finger placement of the chords.

The software has up to 32 audio tracks available at 24bit/96kHz quality available and up to 64 MIDI tracks whether used for virtual instruments, to feedback to external sound modules or whatever you choose. Track setup can be saved as templates for ease of setup for following projects and to keep your project layouts consistent for ease of work.

Like all Cakewalk products, recording, editing and mixing are a simple matter of point and click operations with incredible accuracy. In recent versions Cakewalk has added track icons for ease of distinction between tracks to all their tracking programs. Personally, I find it childish looking, but I have found out that I am in the vast minority in that opinion, with many users asking for them in order to make tracks quicker to find in very large projects. I guess I can understand that, since myself, I generally have pretty small projects, a dozen tracks or so at most, generally.

Cakewalk tracking programs have always been known for a couple things, and it continues with GTP4, and that is the incredible ease of MIDI sequencing, whether real time or step time, and the consistent user interface design between their applications. What that means is that if/when a GTP4 user decides it's time to upgrade to SONAR Home Studio, SONAR Studio Edition or SONAR Producer Edition, the transition will be much easier since all the programs look and operate the same as each other. GTP shares the same interface as a few of Cakewalk's other applications, though SONAR STudio and Producer editions are different, they share the usability of GTP, making the transition easier.

The application also has a wide array of effects available. Phaser, Chorus, Flanger, Modfilter, Delay, Reverb, Compressor, Gate, Parametric EQ and loads more, as is expected from Cakewalk product bundles. Each effect has a few useful presets, and, of course, you can tweak to suit.

A new effect, Boost 11 (Spinal Tap anyone?) is a maximizer/limiter with a "look ahead" system to prevent clipping. From what I have heard, it is very easy to use, and provides a pretty darn good result. A definite nice-to-have rather than spending hundreds on Waves Ultramaximizer or other such uber-expensive plugins. 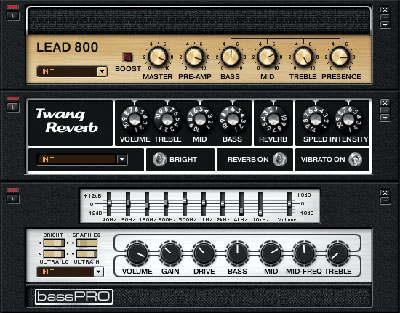 Of course, any program called "Guitar Tracks Pro" would not be complete without its own arsenal of guitar tools, so with that, lets take a look at the Virtual Guitar Amp. The virtual amp is a light version of Native Instruments Guitar Rig 3, and has many tools available for everything from loud and dirty rock n roll to clean and smooth jazz to twangy country.

The package comes with three available primary "amp heads", one for sharp, intense leads, one for tube amp sounds and one for bass guitar. To work along with these "amp heads" is a collection of effects including chorus, reverb, flanger, phaser, distortion, overdrive, autofilter, wah, EQ, noise gate and a compressor.

With this collection, you can track all your guitars and bass guitars and give them all the unique tones, and special effects that you need. Software modeling has long been the subject of debate and has often been substandard in terms of tone quality, but in recent years, with the faster processing and more powerful workstations that have come about, it's come into its own and is increasingly being used by everybody from amateur bedroom recording musicians to professional performing and sessions players. Native Instruments has been one of the leaders in the area of software based modeling, so it should come as no surprise that this modeling package can really stand up for itself in terms of quality and ease of use. 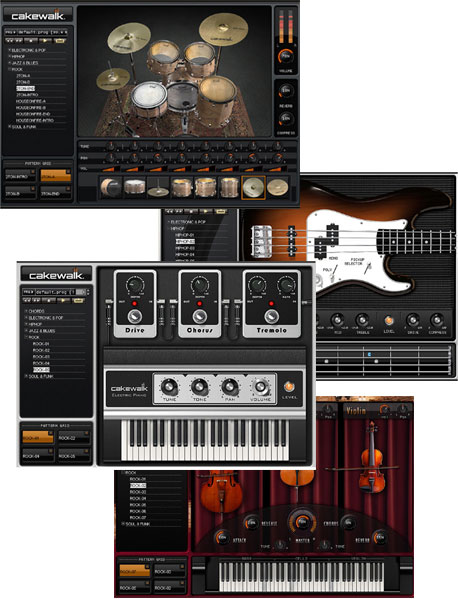 Every hobby musician or solo songwriter likes few things more than a good collection of virtual instruments to add in backing tracks of instruments they may not be able to play themselves, or simply don't have the time for a quick demo.

It should then come as no surprise that GTP4 comes with a nice little collection of backing band instruments to compliment the guitar tracks being recorded. It comes bundled with virtual instruments for electric bass, drums, piano and a string section of an orchestra. Of course, if you need more than that, Guitar Tracks Pro 4 also supports VST and ReWire, allowing you to add on as many virtual instruments as your heart, and musical vision, desires.

All of the instruments come bundled with a lot of patterns from many different styles of music. Rock, pop, hip hop, jazz, blues and much more are included and can be used as is, or can be added, and modified to suit your needs.

The drum machine, in addition to the bundled patterns can also import your own drum sounds, save your own kits and presets, and it supports using your controller, computer keyboard or even your mouse to play the drums, recording them in real time or sequencing in step time.

Each drum can be panned, tuned and leveled individually and compression and reverb are also available to tailor the sound of the kit to your liking.

The electric bass can be played via your MIDI controller, computer keyboard or the virtual fretboard within the UI. The bass has its own virtual amp head including EQing, panning, drive and compression for a wide range of available sounds. It also has the ability for the user to select the pickups you want to use and even sliding between notes.

The piano can be played via your controller, computer keyboard or with your mouse playing the keys within the UI. The keyboard has its own drive, tremelo and chorus effects, as well as typical tone and panning controls. It has many, many different synth and keyboard models available to choose from to get most any sound you could possibly dream of from a beautiful grand piano to a wicked cool B3 to an old school Hammond Organ.

The string section has bass, cello and violin sounds within it. Each instrument can be panned and leveled individually. The sounds can be controlled via their own attack and release controls as well as chorus and reverb effects. Like the others, these can be played via a controller, the computer keyboard or a virtual keyboard in the UI played with the mouse.

So, How Does This System Stack Up?

I am impressed with the product. The audio interface is co-branded for Cakewalk, made by Roland, and it offers many I/O options, it's small and lightweight, yet solid. The ASIO and WDM driver options both provide perfectly acceptable latency ratings by default installation settings. I don't like the "gold connectors" on the box though. I have never understood why it's used other than it's a clever marketing schtick. Gold is a terrible conductor, standard jacks do better. That not withstanding, the interface does give a good sound, so it's not really an issue, I just always chuckle when I see "gold connectors" on anything...

Setting inputs and sample rates on the device are done via dip-switches on the back of the unit, which I found unique. I have no opinion really on that being good or bad, just something I don't encounter on consumer level sound interfaces often.

The application itself is exactly what I expected, Cakewalk is the best when it comes to usability, and this is no different, it has the same SONAR style recording and mixing interfaces, as well as the MIDI sequencing. They have done very well in these terms, although, while I am the minority, the cute little track icons still make me feel like I am using a $25 big box store "pro recording app".