It's been a long time since version 4 first reared it's head...now we get a look at version 5.

MultitrackStudio has long been my favorite shareware multitracking application. It's great feature list and good price, combined with good performance and an old school look and feel makes it a winner in my book.

Back in Oct 2005 (wow, time flies) I looked at the then just released version 4 and was very impressed with it. I have continued to use the application for jobs here and there to stay familiar and I have always liked it, for some reason, it's never entered the realm of my main application (I can't really given an accurate reason why, though) but it has been my second every time. It's a small download, small price, light weight and feature filled.

The most obvious change is immediately on startup. The user interface has been given a lighter, more modern appearance while still retaining the placement of the most common components have kept their basic appearance and placement to keep the usability habits developed by users in tact. I like this, I love the new lighter look, but few things annoy me more than an application upgrade that completely rebuilds it's UI and forces existing users to relearn. MTS did an admirable job giving it the new look and keeping the old habits. 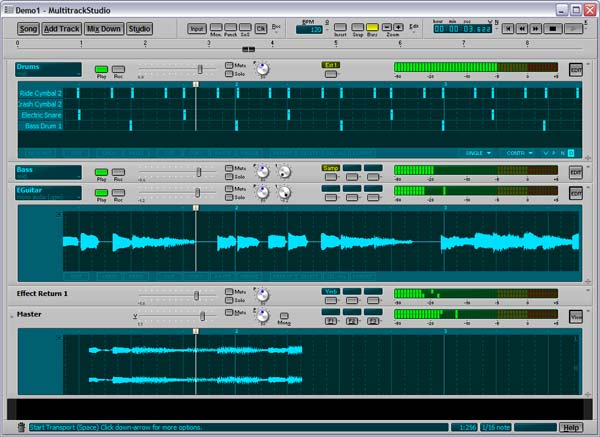 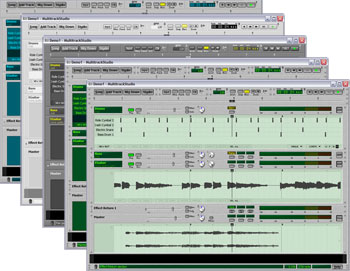 Beyond the default appearance I find there are also 4 other "themes" to choose from. Five different color schemes, some of which are kind of obnoxious, in paging through them, I find the default far and away the most pleasing.

Of course, beyond just being prettier, there are a lot of other features that any musician and engineer can appreciate:

Those are the high level improvements, there are dozens, if not hundreds, of other features, tweaks and changes of lesser immediate impact, but when you get to them, you'll dig 'em.

How's It All Come Together

After messing around with MTS5 for a while, I like it, it works like most other applications at the basic level. Arm a track, record it, play it back, add effects, mix a few, etc. One thing I have always wished would improve is the selecting of effects. So far you roll over an effect insert, right click, choose the effect and it fills the spot, then click on it and it opens to edit. I would like to see, upon first selection, the effect panel to just open upon insert, saving a click. Quite frankly, I can't think of a time I have simply opened an effect and not wanted to edit it a little right there.

I played around in the audio devices configuration tool for a couple minutes, bouncing between drivers and such. The default "WinSound", which is for built in devices, gave my ESI [email protected] a latency of 46 ms, which is far higher than it is capable of, I played around with samples and got it down to about 23 ms with some skipping problems. Handing the chores over to [email protected]'s ASIO drivers brought the latency immediately down to 12 ms, not bad. It runs about 4-7 ms in other apps, but 12 is totally acceptable.

As with most applications, the toolbar is the single resource for access to the configuration and usability of the program. You can see in the image below, MTS's toolbar is no different.

Opening MIDI tracks, assigning default MIDI sounds and sequencing them is very easy. MIDI notes are easy to assign, edit, move process. By default, the snap is off and the note pops in exactly where you mouse is. I like that, it adds a subtle human element to the tracks without being perfectly quantized by being snapped to the nearest measure or beat.

I do have to say, however, that I did experience some performance issues when loading some of the bigger synths or bigger patches within the synths, and even one crash, MTS doesn't seem to like the synth Rapture and would load the drum machine Velocity. Much of the time it was simply a massive patch that I would probably never use in real life anyway, but for the sake of testing and review, I figured what the hell. It turns out that an update or two to most of the synths have resolved, or at least lessened, many of the problems, however, MTS will choke before Sonar does on some of those synth. That being said, those are BIG samples and Sonar costs about 8 times as much too.

Over all I have to say I enjoy working with MTS, despite a couple issues, the MIDI tracks are easy to add, assigning a softsynth to the track is easy and quick, and getting into the piano role or getting the MIDI controller to set the notes is also done with ease.

I like MTS's simplicity when it comes to dealing with audio tracks. Arm and record, disarm and engage it to play it back. All the editing and processing is all done right within the wave display.

As demonstrated in the image above, you can see all the options to manage your audio track are all right there. You can select parts of the wave; cut, copy, paste, process, fade in, fade out, normalize and anything else you needs. There are three effect inserts, however, any one of those inserts can have another bank of six inserts added to it, so the amount of inserts each track can have is limited more by your computer's horsepower than the application itself.

Overall the audio works as it always has, which is good, because it's all within this single interface, not stacking windows doing different things, it's a nice, easy, single window with all you need.

All in all MTS has made a nice leap forward in appearance and functionality, as well as sound quality from what I have heard. It continues to be an easy to use, intuitive program that produces high quality sound for a very competitive price.

I's still like to see surround sound bussing capabilities some day, but hey, maybe version 6. Word from the boss is that a new small release is coming out shortly that will support side chaining of VST plugins!