Detailed guide (very detailed) to setting up a bi-amped system.

In order to set up a system in bi-amp, you should know a few things about your system first.

Armed with all of this information we can easily configure a system for bi-amping.

How many speakers are you using?

This question refers to how many you plan on putting per side of your stage. It is common to put at least 2 top boxes and 2 subs a side. This is mainly for coverage and SPL. (Sound Pressure Level) Coverage refers to the vertical and horizontal pattern of your speaker. Weather they are 40 degrees vertical and 60 degrees horizontal. This is just an example. Consult your owner�s manual for this information. And this will help you in placing the speakers around the stage.

What are their ohm loads?

All speakers list what their ohm loads are printed on the speakers them selves. This is one of the most important things to know about your system. Since everything about sound engineering revolves around electronics. All amplifiers will list what they produce at a given ohm load. When you are connecting more than one of the same type of speaker per side. Also, how they are being wired into your system.

There are two ways to wire speakers into a system. Series or parallel.

In this example, let�s say we used an 8 ohm speaker. Here we don�t need to do any math, because it is only one speaker.

In this second example, we are still in series. Notice here we went from the negative of the first speaker to the positive of the second. If we stick with an 8 ohm load again, we need to do some math to see what the total ohm load will be. 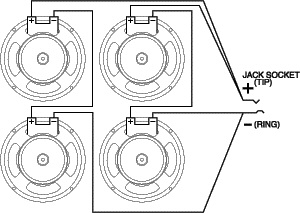 In figure 4, it looks more confusing than what it actually is. Here we just divided in pairs, and then divided the two sums again in half. Sticking with 8 ohms again, we have 8 / 8 = 4, and the same again for another 4. Then 4 divided in half is 2, so 2 ohms is are total here. I know it seems strange that we are adding more speakers, but we are lowering the ohm load. This is just how parallel works. A rule of thumb to follow is to never exceed 16 ohms, and never reduce below 2, and you should be fine.

What are the RMS ratings?

First, what is RMS? RMS stands for Root means square. If your are familiar with higher math, then you know what root means square is. If you are not, RMS is .707 off of the total of our wave. (Syntax, and cosign) This measurement tells us that we can run a speaker all day and all night at that wattage rating. If you never exceed the RMS wattage rating, than you will never damage your speakers.

When connecting more then one speaker weather series or parallel, we add the wattage rating together for the total RMS. 2 100 watt RMS speakers can handle 200 watts RMS. Other terms that are listed on the speaker are Continues, Program, and Music. All of these are the same rating, just a different use of the term.

What is the power output of your amp at ohm load?

All amplifiers list in their spec sheets list what the power output at a given ohm load. This information helps you determine how many speakers that you can put on one side of the amp. Let�s just use an example of 400 watts @ 4 ohms. By placing a 4 ohm load on that side of the amp, you will get 400 watts out of your amp at unity. (Unity is a term that is used for a dB level. 0 dB is the same as unity. And 0 dB is 1 volt.) From the equations given above for series and parallel, determine your ohm load for that side of the amp. Look at your spec sheet, and see if you are to high or low, or just right for the power needed to drive the speakers that you have.

If the power output is too high for your speakers that you have. This is an easy fix. Here you just turn down the input knobs to the amp. The two knobs on the front of the amp are the input knobs, not the output. In your spec sheet you will find how much you are lowering the input to your amp when you turn the input knobs.

If the power level is to low, you may want to reduce the ohm load even further on the amp. You can do this by adding more speakers in parallel. And if this is still not matching your specs, than you may want to consider a different amp.

How many channels are needed?

This is a vary easy question to answer. For every speaker box you have, you need an amp channel. Is one way of finding the answer. Another is if you are running each speaker in your box separately. (When you are supplying power to each speaker in the same box, the speakers are then referred to as drivers. Such as HF driver, high frequency driver, tweeter or horn. LF driver, low frequency driver, woofer or mid.) When you are running the HF driver and LF driver separate, than you need two amp channels for each speaker box.

All of this has been leading up to how to run a system in bi-amp. From here you have enough information to know if you have the proper gear to be able to run in bi-amp.

There are still a few more things that you need to know. Such as:

This is how your wave moves though your system. It is important to know this, since this helps in guiding you as to where each piece in your system should be. Signal flow is as follows:

Input comes in on your cable to your board. Then it leaves the board and goes to the EQ. From here it runs into the EQ, and out to the crossover. The crossover splits the signals and sends the signals to the amps. And the amps to your speakers.

The crossover point tells the signal, how many frequencies can leave from that output to the amp. In your speaker owners manual you will find what the appropriate crossover frequency point for your box is. For example, you will see that the top box can reproduce from 100 Hz, to 20 kHz. In this example, we want to pay attention to the lower number, 100 Hz. In this example we are only setting up for bi-amp. So we assume that we are only sending signal to a sub, and a top box. So the top box goes down to 100 Hz. So, everything from 100 and on up we want to go to the top box. Everything below 100 Hz, we want to go to our sub. By setting the crossover to 100 Hz, we will achieve this. So, 100 Hz is our crossover point. This is only an example. Check your manual for the correct point for your system.

The slope is something that on some crossovers that can not be adjusted. If this is the case with yours�, then ignore this section. If you can, then pay close attention to this information. 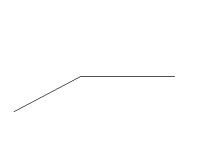 In figure 5 we see what a -6 dB slope would look like. The line running down is called the slope. At the point where it starts is decent is called the knee. The straight line above is the 0 dB line. The line is just a visual depiction of what is happening to the frequencies. Everything from the knee down starts to fade to below the audible range. By setting the crossover point at 100 Hz, at a -6 dB slope, we start a steady fade of all of frequencies below 100 Hz will fade to where you can not hear them. 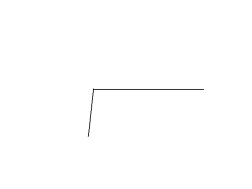 In figure 6 we see what a -48 dB slope would look like. Here you see how rapidly the levels run down. Not only is the slope much tighter, but, as you can imagine, the amount of frequencies are cut down as well.

So why are there different slopes? When you are setting up a system for bi-amp, you want your system to be as flat as possible. Flat meaning the frequency response is even all around. Some times the two slopes in your crossover will combined the energy in the overlap area.

In figure 7, the gray shaded area represents the overlap area. In this area it is possible for the frequencies to combined, and cause the sound to be unnatural. By tightening up the slopes, you can bring the sound back to a flatter sound.

We are now ready to start connecting our system together. Let�s start with all of your pieces again. We start from the board. 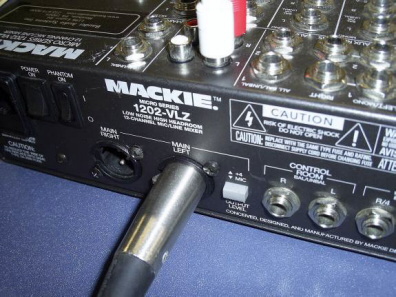 I am just going to use one channel to show you how this is done. Everything that we do here just repeat for the other side. From our board, we exit out of the left side out. With a mic cable, we go to our EQ. 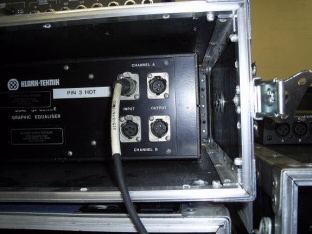 From our EQ, we go out the output, and to the crossover. 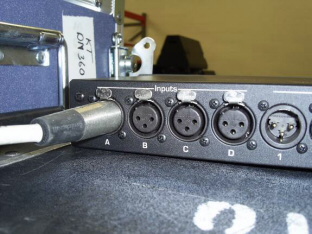 The crossover I am using here is an Ashly 4.24C. It may look a little different from yours, but the connection is still the same. This one just has four inputs. So, I am going into channel one of the crossover. This can also be left, or channel 1, or A. Now that we are in the crossover, this is where the split happens. Now, instead of one output from the device, we have two. A low output, and a high output. (This is only for a 2 way crossover.) Each output will go to a channel of the amps. 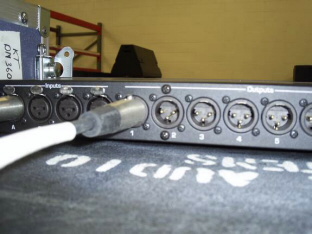 Once again, the Ashly may differ from your crossover. Here output 1 is the left low output. From here we go to the amp. 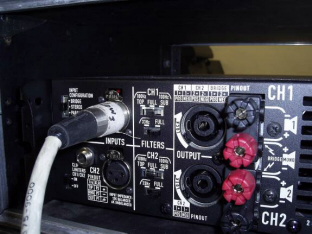 You will want to go to the first channel of the amp for the low output. This is an industry standard. Channel 1 will always be the lower of the frequency band. And channel two will always be the higher. This way anyone can walk up to your system and know which is where.

And there you have it. All of this information just to set up two speakers. Once you fully understand the information here, it will make your life so much simpler when out in the field. I would suggest going though the set up at home first, before going on a job. Just to make sure that everything is working correct, and the sound is fine tunned. Hope this helps you in your pursuit of the sound industry. If you have any other questions, please don�t hesitate to ask.