A look at K-Micro miniature condenser microphones from Karma Audio

You know the saying, "Good things come in small packages". Well that has never been so true, and Karma Audio has proven that with their K-Micro miniature condenser microphones. A user here at HRC happened across these little gems and was amazed at the results he got from them. So being the budget minded soul I am I contacted Karma to see what the fuss was about. I received a first pair of the original mics and was amazed. But that is only the beginning.

They were just releasing the newer higher SPL rated version of the same mic. So I was sent another pair of the newer ones. Now that hit me as a company that pays attention to the customers wants and needs, as many people wanted to use these mics on drums. And though the originals worked OK on the toms and as overheads, the newer version is killer anywhere on the kit for close miccing. One note I should toss in early here is these are sold as matched pairs. Now you would think that at this very low price point a matched pair would be kind of hit or miss. Well that is simply not the case at all, these little marvels were matched closer then a couple of my much higher priced matched pairs. Score another big one for Karma on that one.

OK, I will stop the rant for a moment to give up some details on the mic's. These are sold in the class of Mini condenser. The unit uses a 10mm diaphragm in a very small body. It is basically encapsulated in an XLR connector body. So this is a very small unit for use in almost any application you can think of. Frequency response is rated at 50 to 13,000 Hz. Although in my use it appears to have a bit wider range then that. The pattern is cardioid which works well in most of the situations I used it in. Sensitivity is approximately -34dB. Output impedance is 200Ohms, withan output noise level of <16dB with an A weighting. And the max spl is rated at 145dB. The mic is of course powered by typical 48v phantom power.

Ok, now into the part that really got my attention. Using these little mic's in the real world was a huge surprise for me. I set them up with one on the snare and one in between a standard set of shell toms. The sound was surprisingly crisp and full for such a small mic. Doing some simple single drum hits for samples they seemed to work out very well on all the drums, even the floor tom's. I do not though recommend placing them in front of the kick directly, although on the beater side it picked up the beater smack very well. Combine that with a front kick mic and you have a great full kick sound. As overheads on the kit they work splendidly. And can be easily directed to pick up more or less of the brass on the kit.

Next they were set up along side a mic I like using for horns. I won't use any names or models to compare with here, I'll simply state the mic used is about 20 times the price of the new higher SPL K-Micro. We recorded several simple horn lines and a few blasts as well to test the max the mic would handle. Again to my surprise these little didn't come up short on sound. I brought in an unbiased ear to see if he could hear the very subtle differences in the mic's. He stated bluntly he could not. Even having done the recordings and knowing where the subtle differences were I had a hard time after my friend mixed up the samples and played them back randomly. I really had to listen several times to hear the difference. I explain were those differences were in a minute.

Next up was an acoustic guitar. Now I am very picky when it comes to setting up and what mic's I use to be able to pick up a good combination of body and string sound. I prefer an LDC on the body just to be able to have more control over the proximity effect and controlling how much bottom end gets into the recording. But for kicks we used the pair without an LDC for the first trip around. Again, They captured a very full sound for such a small mic. And moving the body mic in and out came pretty close to controlling the amount of low end it picked up as using my favorite LDC. I'll be using at least one on almost all acoustic stuff from now on. 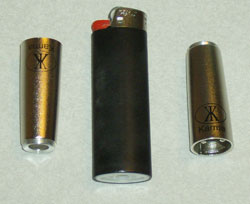 Not sure what made me think these would work out on a vocal as a single mic but it was worth a shot. We did a couple of quick male track and a female track of pretty run of the mill straight up pop type vocals. And again they caught me by surprise. They captured a very nice round vocal sound. I have to be honest here and state they might not be my first choice for a perfect vocal capture, but I am the type to experiment and use several mics on one vocalist at times if the style permits. And honestly these will be the mics I go to for room mic's and secondary position mics. Easy to set up anywhere and still get a good sound.

I also set them up in several situation's as room mic's and secondary mic's for various instruments. As well as popping them over a small grand piano. They captured the horrible sound of this un mantained piano to a T. Which was the high point of the morning. The owner of the studio I was using for this testing hopped online and ordered a couple pairs as he was as impressed as I was. And again, for the money you can't afford not to have a few of these in your mic locker.

Over all, I can't say enough about how impressed I was with such a small little mic getting such a good over all sound. I have been in the market for a couple of new mic's and from what I have heard from these little K-Micro's I will be jumping straight away for one or two of their K6 ribbon mic's as well as a matched pair of their K58 Tube condenser mic's which I was fortunate enough to hear from a user on and they loved them. And I'll be grabbing up a couple more matched pairs of the K-Micro's as well.

There isn't really much bad I can say about these mic's. They do so much for a very small price that I don't think anyone could find a downside to using them. They do roll off fairly sharply once hitting that 50 Hz mark, but I'm not expecting to use these SDC's an anything that I'll need to hear anything below that anyway. Be warned though that they are a pretty bright mic. The curve on them is really pretty smooth with a very small bump up at around the 8k to 10k mark, and I do mean small. For the most part in using them on other sources other then I stated, they performed well over what I expected. And honestly, on some of the side by side tracks we did I had an absolute hard time telling them from the much more expensive mics we used.

To end I'll state that they do have a small quantity of the lower SPL mics (125dB) left which can be purchased in 4 packs for the paltry sum of $20.00 US. The newer Higher SPL version is available in matched pairs as well a 5 piece kit with clips for drums. You'll want to check the site for price and availability. The higher SPL version is a bit higher priced at $20.00 each, but I still consider that one great bargain for what you get. Karma Audio has some great stuff and I for one am glad to have been introduced to them and will be stocking up my mic locker and recommending their gear with confidence.