Based on the Vocaloid 2 software from Yamaha. 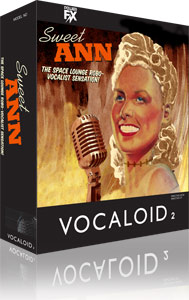 We haven't heard much from PowerFX in recent months, though they are always releasing more sample and loops CD's as well as new sounds to their portal. Recently I heard from them regarding a new big release of theirs. They released a virtual vocalist application based on Yamaha's Vocaloid software named "Sweet Ann".

Vocaloid is something I had been really wanting to take a look at for a long time, but had a very hard time getting my hands on, so when PowerFX offered me the chance, I jumped.

Vocaloid is, in a nutshell, a piece of software that works much like any MIDI tools in a multitracker application. Point and click on the notes that make up your melody, enter the words for each note and the application "sings" it back to you.

Vocaloid is not sold as an independent application, but rather licensed to others, such as PowerFX, to create voices to use within the application and bundle the applications synthesis engine along with. I can't be sure, but I believe Sweet Ann makes the fourth voice now available. There may be more, but I know of four, three female voices, the three others being created and marketed by Zero-G. There could well be a few I don't know about as well, so don't take that statement as gospel truth. I have been told Zero-G is coming out with a classical voice called "Prima" in the near future and PowerFX is coming out with another title, a male voice, called "Big Al" in 2 or 3 months.

The editor is a very simple, MIDI interface where you point and click to drop in notes just as you would in any step-time sequencing. While doing this you can right-click and select the "Insert Lyric" option to add the word or syllable that note should be sung as.

In addition to those more obvious aspects of vocal synthesis, there is a lot more to Vocaloid. The editor allows up to 16 tracks per project, each track with independent effects, mixes and voices. If you have each of the available voices you can use each one in any project, which is very cool. The one real massive irritation I found in the editor is limiting the undos to ONE; anything short of unlimited undos is, to me, inexcusable.

The resulting vocals can be used within a tracking application in one of three ways. Vocaloid can integrate with any VST supporting application, it work via Rewire and failing all that, you can also dump your mixes to a wave file and import that wav into any tracking project in most any application.

Besides all the sequencing options, each individual singer also has customizing options. You can adjust the "formant" which makes it change the gender it sounds like, the breathiness, clarity and brightness of a vocal.

The impact of those settings is pretty cool, subtle, but noticeable, except in the extreme cases where it's just downright destructive editing making for some real weird sounds. The settings and combinations can, of course, be saved as presets to be available at another time for other projects, so you can make voices you are happy with and use them over and over again.

I could talk until I am blue in the face about the application, its features and all that stuff. What it all comes down to is what it sounds like. So let's just get on with it.

I have played with a few different methods of vocal synthesis in my day...vocoders, pitch correction and the like. But they all have one thing in common, they all start out as the singer's voice and you are messing with it. Vocaloid is a bit different, it's a synthesized voice that you tell what words to sing, what pitch to sign them at, how long to sing them, how much or how little vibrato to use, when to start it, control many aspects of the vocalist themselves and much more. All that with up to 16 different tracks harmonizing with each other.

Sweet Ann is a smooth, sexy voice with what sounds to be a bit of a foreign accent. However, accents can somewhat be controlled, or faked, depending on how you break up syllables from note to note. I experimented with some words to see how to control it. My daughter had a friend over named "Braydon", much to their amusement I was making Sweet Ann sing hello to them both, but breaking up his name I had to play around. "Bray" was easy, but getting the right end was tougher, I tried "don", "den" and "din". Sweet Ann did each one correctly but none of them flowed quite right...each one gave the voice the sound of an accent that I mentioned earlier.

That being said, some words flow quite well, and, from my playing around thus far, using Sweet Ann as a backup harmonizing singer, doing "ahhhh" and "ooooo" being a songs chorus works wonderfully and sounds quite believable...even layered with different voice qualities adds a very interesting choir sound to the tracks.

Playing around with Sweet Ann was a lot of fun. The first 5-10 minutes were strictly a "WOW" time...just impressed in the synthesis altogether. After playing around longer some of the limitations came out. The single undo drives me crazy, still stunned that limitation made it to the second version of Vocaloid. The voice itself is impressive, but not perfect. She will definitely be making cameo appearances in my music as a backup singer, still not sure if she will cover many leads.

I do look forward to the next release "Big Al" to see what a male voice can do.