Taking a look at Line 6's newest release in the TonePort series. 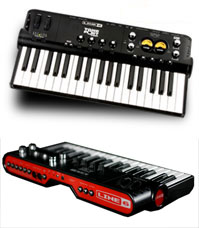 Here at HRC we have been fortunate enough be able to use and abuse most of Line 6's computer based modeling gear. We have looked at GuitarPort, both TonePort models, POD xt and Bass POD xt. We continue in this tradition by taking a good look at their latest offering, the TonePort KB37. The KB37 is, for all practical purposes, a TonePort UX2 with a 37 key MIDI controller attached to it. Along with that control comes pitch and modulation wheels, an octave adjuster and a few assignable control knobs.

As with the other TonePort's, the KB37 uses the Line 6 GearBox as it's software interface, and is used with a computer via it's USB port, which also powers the device. GearBox controls the modeling for the guitars, basses, vocal mic preamps, all related effects and uses the 37 key keyboard to send MIDI data to all your software-based synthesizers.

Any discussion of computer gear must be started with a mention of what is required to use it, as recommended by the manufacturer. 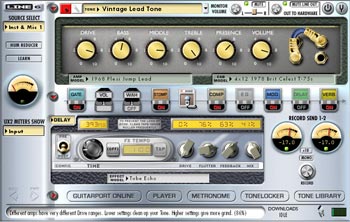 The KB37 comes as a software and hardware bundle, just like the original TonePorts. The hardware is, as stated above, a 37 key MIDI controller, with the features of a UX2 TonePort available as well. This includes microphone inputs with available phantom power, line inputs and outputs, guitar input, S/PDIF I/O, USB port and footswitch. One cool feature is the onboard level meters that are not a digital display but actual needles bouncing to and fro. Call me old school, but I think that combined with the big silvery knobs for level control gives it a cool retro look.

The software that comes bundled along is Line 6's GearBox. GearBox is the software that is used to control for the entire Line 6 hardware computer interface line, including the PODs. I like this integration because it makes it easy to go from unit to unit, either through upgrading as one buys their higher end products, or just working with bands that have different products they prefer. Regardless of the reason, it's one piece of software to run all their products.

The software is attractive and easy to use. From its interface you will select presets, or create your own tones with a mixture of the available amp models, effect models and more. For guitarists it has 18 available amp models including Mesa/Boogie, Soldano, Fender Bassman, various Marshall's and Orange amp models along with some Line 6 designed sounds. Bassists have 5 amp models including the obvious Ampeg's, an Eden, Fender bassman and a Gallien Kruger. Vocalists have a choice of 6 preamp models based on a Neve, an Avalon as well as a standard solid state and tube pre. There are over 30 effect models that include all the most common needs such as reverb, flanger, phaser, distortion, fuzz, chorus, delay, de-esser and so on, many modeled after some of the most famous effects processors in their field.

As mentioned in reviews for the TonePort UX1 and UX2 and the GuitarPort, the GearBox software is very cool and very easy to use...and to beat all that, it looks cool too. I won't bother re-living any quasi-tutorials or anything like that explaining the software, you can just look through those older product reviews linked to above, but it is intuitive and attractive so it makes a great package. One window to display the amp face, a window below that to display the controls for any selected effect in the chain and a window below that for the tone library, online services, metronome and other such features. Very cool.

Like with most of the Line 6 gear I have used, the KB37 is a great sounding bit o' kit. All the great features of the UX2, including the models, which are the same as from their flagship product, the PODxt series modeler.

I like this product because it helps me in my quest to downsize my studio while still maintaining a high level of quality in the music I produce. While Line 6 can't help me become a better musician, the KB37 allows me to record my guitar, bass and MIDI all direct. This makes home life better not needing a blaring loud cab in the basement. It also makes for a smaller footprint given up to my music addiction, which makes for less space needed, less cables to trip over and less software and hardware to learn...it's all right here in one nice neat package.

I have found though that with my previous MIDI controller I had gotten used to more assignable controllers, there are four knobs, I would like to see 8, but, it's certainly not a deal killer and will likely only effect a small percentage of users, and me really only once during the review process. I also found it hard difficult to configure some of the features, the transport controls being one.

All in all, once again, I really like this product. I see this unit being incredibly attractive to somebody like me that wants quality sound, but simply doesn't want to commit an entire room of the house (or more) to a studio. If you already have a POD, Bass POD, or amps and isolation rooms, the KB37 may not seem nearly as cool to you, but, for the other 99% of the population, I see this is a contender for the coolest product of the year, covering nearly every instrument a typical rock band needs all in one nice, neat, reasonably priced package.

Line 6 has never been seen as a product for the monetarily challenged, but I will say this, hats off to them for continually pushing the envelope and driving the price of their wonderful modeling technology down.