The new release from Secrets of the Pros builds on their previous two Pro Tools instructional DVD's. 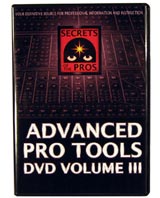 Who is this giving "Secrets of the Pros" anyway?

Until being offered a sneak peek at this DVD I hadn't heard of this outfit, so, the first course of action was to find out who these people were. From their web site, I found a lot of info. Secrets of the Pros was founded by Ken Walden, who, like most of us started jamming in garage bands before turning to engineering, his engineering career led him to work with some of big names as musicians and other engineers. After that he went to work for Digidesign, the makers of Pro Tools, as a product specialist.

Not sure about all of you, but to me, that's a pretty solid resume for somebody to share information about an application, since they worked with it for around 10 years, as well as with the company that developed that application. OK, curiosity satisfied.

About this Series of DVD's

This collection of DVD's is a series, meaning one builds on the next. The first one I saw was volume III, and, not being a Pro Tools guy personally, I was occasionally losing my place, being, having been making music a good chunk of my life, I generally got the concept.

This DVD is professionally produced, good looking picture, and of course, a high quality sound. It wasn't made with a webcam and mastered with shareware, that I can assure you.

The topics covered are plugins, automation and using control surfaces. Each topic is covered with enough depth to make it useful and relevant but not so incredibly detailed you wind up forgetting half of what you watch. That is the goal with Secrets of the Pros, to give you a good, solid kick in the right direction with enough information to get you running on your own, and it accomplishes that.

After the topics are covered it looks at how to best use this knowledge to get yourself the best mixes possible and how to use the plugins and such to get the results the big names have been getting for years, even before the magic of digital.

The Value of the Secrets

This isn't exactly my first rodeo, so some of this stuff I knew, obviously, but there was some good stuff in here I didn't know, or hadn't thought about, ways to use different effects in mixdown and such, that I found educational. The best part is that whether you are a Pro Tools user or not, some of the advice given on this DVD can be of interest to you. You may have to figure out how to adapt it to your DAW, but it's still good, solid advice.

After having watched this, it does make me want to check out their first DVD Modern Recording and Mixing, which is actually a two DVD set, as it might be a very useful given how this one was presented.

The two follow up titles are $25 each, the Modern Recording and Mixing and the first Pro Tools DVD are $40 each. This is about the price of a decent book on the subject, and unlike a book, on a DVD you actually get to watch the concepts and techniques in action, not have to visualize it.

All in all I'd have to say if you are looking for a quick way to get up and running in a Pro Tools environment with little experience to help, this video (and presumably the others) are presented in a clear way that anyone can move along with. The DVD following the computer screen when necessary for a complete view of exactly what the narrator is covering. Good lessons, good topics, clearly covered at just enough detail to get you moving quickly.