hey peeps, how do i add effects to just the end of a track?? What im doing now is duplication the track and deleting everything on the duplicated track but the last part i want effects added too, and I KNOW theres a easier way then that! Im using Sony acid music studio 6.0.....thanks!

Once you've separated the track into two pieces and you have only the region you want effected selected, you should be able to process it without affecting the rest of the track.

EDIT: "Region" is a ProTools term, in ACID they're called "Events"
CavvyStudios
www.cavvystudios.com
Member
Since: May 31, 2010

"Music is my boyfriend". lol, nice! What you need to do is Automate the effects on your tracks. I don't remember how to do it in Acid. I haven't used Acid since it was Acid Pro 4.0 owned by Sonic Foundry before Sony bought it. Basically there should be a function that allows you to draw automation onto your tracks so it sounds like you're smoothly raising or lowering a fader or twisting a knob, etc.. Just check out the Help section in Acid and it should be a pretty straightforward process. I hope this helps, good luck with it.
CavvyStudios
www.cavvystudios.com
Member
Since: May 31, 2010

If you want a sudden effect change (and after re-reading your post, it sound like maybe you do), Quincy's method is the way to go.
muzika
Music is my boyfriend
Member
Since: Jan 31, 2008

hehe yah liek that term...ok, well its still adding the effect to the whole track, i did the split thing properly i think, the one part is a darker color, but the problem is u cant right click for effects, u have to go and hit the effect button and it puts an effect on all the track...what am i still doing wrong?
Im not great with terms, so try to keep it fundamental plzzz :)
what am i still doing wro
crux
Typo Szar
Member
Since: Jul 04, 2002

Ur going to want to do automation. Im not an Acid user so ull probalby have to look it up in a manual, but its definitely a situation for automation.

to be honest however, the way ur doing it now is a very viable method and not "wrong" in anyway, alot of ppl, professionals included, do it just like that. Its just easier.
muzika
Music is my boyfriend
Member
Since: Jan 31, 2008

oh really? haha i thought it was a crazy way i just made up to do it lol..it just adds alot more tracks in the end tho cuz i liek lotsa effect..
muzika
Music is my boyfriend
Member
Since: Jan 31, 2008

Well if ur trax r building up than definitely switch to automation, just to keep things clean and CPU friendly but ultimately there r no right or wrong ways to do something as the result is the deciding factor.

I like the cutting into a track becoz in Cubase for me its just easier than automating, plus i think its a bit "safer" and just simpler on my brain as i dont have to sit around going.. well if the delay starts here... will it slur the next thing?
muzika
Music is my boyfriend
Member
Since: Jan 31, 2008

Automation is like a valve, controlling an effect parameter, say for instance, volume.

i.e. volume gets turned up, or reverb gets increased, or other effects.

In this manner, you can have an effect on a track, but the automation envelope has it's 'wet' send set to 0 for most of the track, but when you need it to work, the envelope turns up the parameter to the desired setting, for however long the envelope says.

Here's a general idea, though the img isn't great: 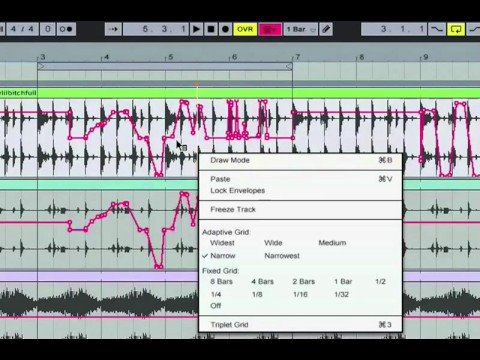 ugh, now its just getttin too tehcnical lol, im nore visual i need to see things done, cuz terms mean squat to me...I think ill stick to the way i was doin it lol...
CavvyStudios
www.cavvystudios.com
Member
Since: May 31, 2010

I use a slightly different method in Music Studio or Samplitude, and I'm guessing it could be done in Acid Pro: I put the desired effect in an AUX bus, and send the track audio that I want the effect on to the AUX bus, and simply automate the AUX bus in the spot where I want the effect to become noticeable. The AUX bus is flat-lined until whenever the Effect needs to be turned on, and then the automation "curve" (its not really a curve, is it?) spikes up to get it going. I'll automate the main send track too, to reduce the volume rise (if any) at the same moment the AUX signal kicks in.
It might sound complicated, Muzika, but its really easy to do once you experiment with this method or the above-described ones. I listened to your song: you've obviously figured out quite a bit on your own already, so I'm sure you'll get this. Your song is good! Sounds good too.
muzika
Music is my boyfriend
Member
Since: Jan 31, 2008

thanks so much Tim that means alot, yes i taught myself, but im not a patient learner lol...The technical terms for things is what confuses me, i mean ive probaly done most of alot just dont know the terms, i usually just fiddle with stuff lol..
pjk
Prince CZAR-ming
Member
Since: Apr 08, 2004

Ok, you could say,

think of your track getting played. and there's an elf sitting next to your computer. You tell him, that when the tracks plays to 1:15, for him to turn up the volume on track 6. When the song gets to 1:34, he should turn down the volume back to where it was.

That's an envelope. The guy turning up the volume (or whatever parameter) to a certain point, then turning it back down at another point. Looking at the picture I posted, the pink lines are the envelope, or the instructions of when to turn up the dial, and when to turn it back down.

You can automate most any other parameter, like your effects. the envelope can tell your effect to get turned up, so it's active, at a certain point, then turn it back down at another point. That's the dots in the pink lines in the picture above.

Ah ok ic ic, just tryin to do that tho, hahah oh boyz, ur all so sweet trying to help out haha thanks:) ill fiddle with everything..